This other me…this other life

Posted on July 31, 2010 by raisingsmartgirls 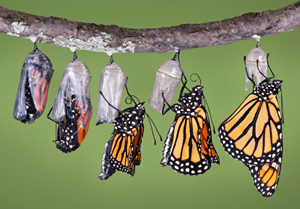 A metamorphic process is underway in me.   It’s something that began 6 years ago…when I stepped out of the treadmill of conventional service-for-pay employment.

I’ve been engaged in some online conversation about finding meaningful work when you have many gifts/talents to explore.  Among the helpful feedback I received was: “stop doing insignificant work in the world”.   I agree, wholeheartedly.

What I failed to mention, and often don’t talk about…is that I do  feel I WAS doing some significant work when I was in the clinical laboratory.  I feel like that was a totally different person from who I am now.

Before my junior year of college, I had my first clinical laboratory job, mostly out of necessity, because I moved out of my mother’s home when I was 22 and into my boyfriend’s parents’ home (while he was away in the Marines) and simultaneously stopped working for the ‘family business’.   After consulting my professor/advisor,  I was told about a food microbiology lab that hired college students.  I interviewed and was hired and I worked 16-20 hours a week while I took a full course-load at school in biotechnology.  Within 2 months, I realized my living arrangements left a lot to be desired (his father lost his job at Motorola and he coped with midnight wine guzzling sessions) so I came back home, broke up with my boyfriend, but kept my job.

I spent the first 3 years of gainful employment testing food products for microbiological contamination to ensure food manufacturer’s products were safe to eat. I tested things like drink powders, such as instant coffees and diet shakes,  pastas and chocolates and flavorings and breads and other things for yeast and mold and salmonella and listeria and occasionally had to test for food poisoning outbreaks like 0157:H7. I worked my way up from the bench, to Quality Assurance for the laboratory…and then for the corporate HQ.  I was working concurrently on a master’s degree in analytical chemistry and was asked to be the QA assistant for both the microbiology department AND the chemistry department. I was given a short workshop in Statistical Process Control and had to teach myself Excel and Minitab (yes, it was long time ago) in order to track performance of 10 nation-wide labs’ proficiency exam program and help troubleshoot any laboratory problems and write standard operating procedures and corresponding documents. In time, I’ve no doubt I would have been groomed to take over the role of the QA Manager.

I did this until the fateful day I received notice that my 15 month application process for a state police crime lab position finally came to result in a formal job offer (but had to give up the plans for a master’s degree in chemistry).   I conducted DNA analysis on criminal cases – sexual assaults and homicides. I put some bad people in jail and exonerated some innocent people.  I was given letters of praise and regular pay raises.

Then…I decided the stress of working with a major backlog wasn’t worth the pay I was getting, so on a lark, I applied at a private university. I got hired in their human genetics department, as a senior tech/lab supervisor and worked on identifying rare genetic diseases (like Prader-Willi/Angelman Syndrome and Lissencephaly and Myotubular Myopathy – a dreadful, terminal disease for infant boys). That, despite some minor stresses…was the PERFECT job for me.

So you see, to me, my jobs WERE personally meaningful and provided a significant (albeit really tiny in the grand scheme of things) contribution to the world at large.

Except…then I got pregnant. 3 TIMES in 2 years. One ended in miscarriage, one just three months later which resulted in a daughter, and then one 11 months after my first was born.

It soon became evident I was not the juggling type. I could NOT handle being gone 11 hours a day and coming home tired and exhausted while my husband worked the afternoon/night shift and take care of two small babies.

I had my last day when my middle daughter was 9 months old. The ‘plan’ was to come home and make some plans to go back to get my master’s degree in something in the fall. But, 3 months after I came home, I got pregnant with daughter number three.

So much for my plans!

And instead of determining a new path for myself, I hit a bump  and a major phase of maternal ‘depression’. Not a true clinical depression (but sort of), yet a major case of ‘careerus interruptus’ when I wasn’t truly prepared for it.

Incidentally (or not so), it completely surprised me to discover a book called Schuyler’s Monster – the story of a father’s quest to find answers to his daughter’s inability to speak – some years back, while I was looking for information regarding selective mutism, and accidentally came across his book at the bookstore. I sat on the floor and read and cried as I continued to read his/his daughter’s story – and was riveted, having some personal knowledge of what it’s like to have a child who didn’t speak (though MY daughter’s problem was transitory, not permanent like his daughter’s polymicrogyria), only to be jarred to my absolute core when I read he got his final diagnosis from the lissencephaly doctor I worked with once upon a time!

So you see…it’s not easy…not easy at all for me to accept less a direction in my life less than something significant.

I am afraid I lost my heart for what I used to do…and yet, at the same time, I find it hard to believe I will ever find something that challenging and worthwhile again.  Even writing, which I love to do, pales in comparison to what ‘good’ it can offer others.

I admit…too much of my pride/identity was wrapped up in my externally rewarded laboratory career – through a paycheck, through letters of praise, through being a more tangible, recognizable service to the ‘greater good’.

However, I have spent the past few months engaged in some pretty intensive psychological and philosophical literary studies with a dear internet friend of mine. My mind is reeling with new discoveries and insights I have into how my mind works and what really constitutes ‘worthwhile’ endeavors to apply our time. I feel like we have good collaboration at times, though we clash on some things too (enough to make it interesting, I suppose)…mostly because I am “human…all too human” (a subtle nod to Nietzsche).

I’m currently reading a book called by Anthony Storr called Solitude: a Return to the Self…and it’s touching heavily on the importance of solitude (NOT isolation, mind you) in regards to creativity and the creative process.  I’m hoping the incubation process of the past 6 years will result in some new identity, some new cohesive plan of action for my future once I stop ‘talking’ and ‘analyzing’ and distracting myself with all sorts of minutiae and preoccupations and start listening to what comes out of the silence.

5 Responses to This other me…this other life